JOINT BASE PEARL HARBOR-HICKAM, Hawaii — The first prototype of the Navy’s submarine-hunting catamaran-style drone ship is undergoing testing out of Pearl Harbor this month.

The Sea Hunter — a Medium Displacement Unmanned Surface Vehicle, as it is formally classified — arrived at Joint Base Pearl Harbor-Hickam on Oct. 31, said Lt. Cmdr. Tim Gorman, a spokesman for U.S. Pacific Fleet.

The testing, overseen by the Office of Naval Research, is intended to demonstrate the Sea Hunter’s capabilities for endurance and range, Gorman said in a written statement.

The testing also seeks to establish “operator trust in safe, reliable operation via rigorous at-sea testing and modeling and simulation,” he said.

The demonstrations are part of the process to enable “a new class of naval system,” he said.

The Sea Hunter was designed and built by the Defense Advanced Research Projects Agency, or DARPA, which handed over development to ONR in February.

DARPA has described the Sea Hunter as “the first of what could ultimately become an entirely new class of ocean-going vessel able to traverse thousands of kilometers over open seas for months at a time, without a single crew member aboard.”

The Sea Hunter was christened in April 2016 in Portland, Ore.

At the christening ceremony, Deputy Defense Secretary Bob Work hailed Sea Hunter’s creation as a significant advancement in “human-machine collaboration,” a statement said at the time.

“This will be a change just like other momentous changes in our society,” Work said. “You see this human-machine collaboration in our businesses and manufacturing now, you see it in our daily lives, and you’re going to see it increasingly in warfare.”

“[Sea Hunter] is a ship that you just sit down over the horizon and it might be able to do an awful lot of things that you don’t want a manned platform to do, especially in an area where there’s a lot of anti-access, area-denial threats,” Work said.

“[Sea Hunter] represents a new vision of naval surface warfare that trades small numbers of very capable, high-value assets for large numbers of commoditized, simpler platforms that are more capable in the aggregate,” Fred Kennedy, director of DARPA’s Tactical Technology Office, said in a statement in February. “The U.S. military has talked about the strategic importance of replacing ‘king’ and ‘queen’ pieces on the maritime chessboard with lots of ‘pawns,’ and [the drone program] is a first step toward doing exactly that.” 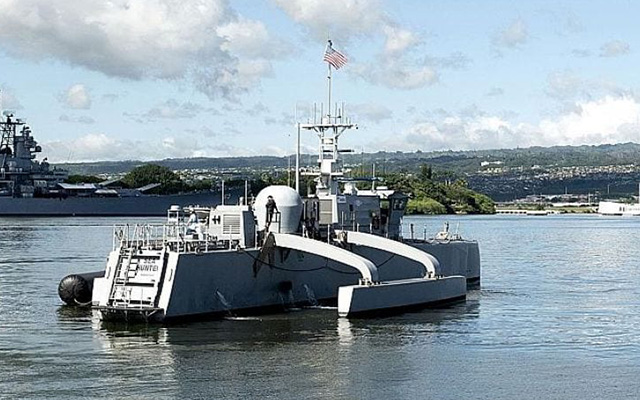