Oasis Systems is a proud supporter of the National Guard and Reserve. Annually we affirm via a Statement of Support that:

To recognize companies like Oasis that support the Guard and Reserves, the MA-ESGR held an Employer Appreciation event at the US Coast Guard Station in Woods Hole, MA.

Woods Hole is the home to Sector Southeastern New England which is one of five Sectors within the First Coast Guard District, headquartered in Boston.

As a team, the crew of Station Woods Hole keep a vigilant watch over the waters of the Cape and Islands, utilizing a crew of 29 Active Duty and 17 Reserve personnel that are able to operate multiple assets, including a recently added 45 foot RBM (Response Boat Medium) and a 29 foot RBS (Response Boat Small). Station Woods Hole maintains a high level of readiness and response responding to nearly 100 search and rescue cases and completing over 300 recreational and commercial vessel boardings annually. 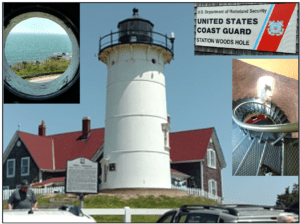 At the Employer Appreciation Event, representatives for each employer were provided an installation overview by the senior reservist there, and afforded the opportunity to board and tour an RPM and the cutter USS Hammerhead. Crew were present to discuss the various missions performed at the station and life as a ‘Coastie.’

Additionally, a tour of Nobska Light was given by Friends of Nobska Light who acquired the property from the Coast Guard in 2016 to preserve it as an educational resource for the community. Prior to that it was the residence of the Sector Commander starting in 1985. The lighthouse provided stellar views of the Cape Cod coastline, and Martha’s Vineyard.

The event showcased the critical role Guardsman and Reservist play in the defense of our country and the sacrifice these citizen warriors make every day.