Kwajalein: On November 17, 2020, the USAV Worthy and her Oasis crew participated in a landmark ballistic missile defense system test.  During the test, known as Flight Test Aegis Weapon System-44, or FTM-44, and codenamed “Stellar Lancer,” The U.S. Missile Defense Agency (MDA), and U.S. Navy sailors aboard the guided-missile destroyer, USS John Finn (DDG-113) put the SM-3 Block IIA missile through its paces by testing the interceptor against an intercontinental ballistic missile(ICBM) for the first time.

FTM-44 kicked off at around 12:50 AM, Eastern Standard Time, on November 17, 2020, with launch of an ICBM target from the Ronald Reagan Ballistic Missile Defense Test Site on Kwajalein Atoll. This remote test site is located deep in the central Pacific Ocean about 2450 miles southwest of Honolulu.  The test scenario was a “Defense of Hawaii” and the target missile climbed toward an ocean area northeast of Hawaii,” according to the U.S. Missile Defense Agency (MDA).

At sea in the Pacific, sailors aboard USS John Finn (DDG-113) used the “engage-on-remote” capabilities of the Aegis Ballistic Missile Defense (BMD) system to receive targeting data from remote sensors via the Command and Control Battle Management Communications (C2BMC) network. The destroyer produced a fire-control solution and launched and guided an SM-3 Block IIA missile toward the incoming threat. The SM-3 destroyed the target using its kinetic “kill vehicle,” which uses sheer momentum, rather than a conventional explosive warhead, to destroy the target as it travels outside the Earth’s atmosphere.

The SM-3 Block IIA interceptor was originally designed to defeat intermediate and medium-range ballistic missile threats, bridging a gap between terminal phase intercept systems, such as Patriot and THAAD, and the Ground-Based Midcourse Defense (GMD) system.  In the words of U.S. Navy Vice Admiral Jon Hill, Director of the Missile Defense Agency, “This was an incredible accomplishment and critical milestone for the Aegis BMD SM-3 Block IIA program. The Department is investigating the possibility of augmenting the Ground-Based Midcourse Defense system by fielding additional sensors and weapon systems to hedge against unexpected developments in the missile threat. We have demonstrated that an Aegis BMD-equipped vessel equipped with the SM-3 Block IIA missile can defeat an ICBM-class target, which is a step in the process of determining its feasibility as part of an architecture for layered defense of the homeland.”

An animation of FTM-44 can be viewed at: https://www.mda.mil/video/FTM44PostMissionVideo2.mp4

USAV Worthy will next head for a maintenance period in San Diego, CA. 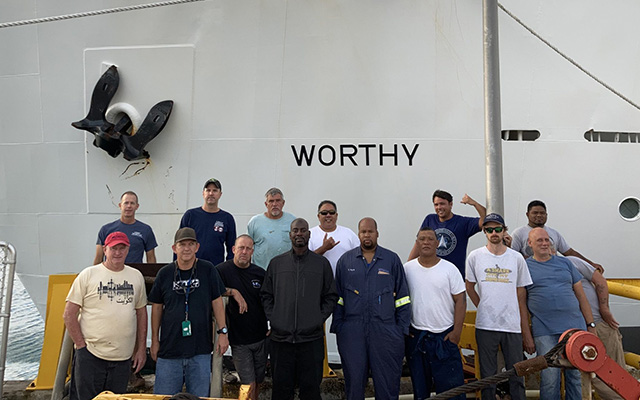